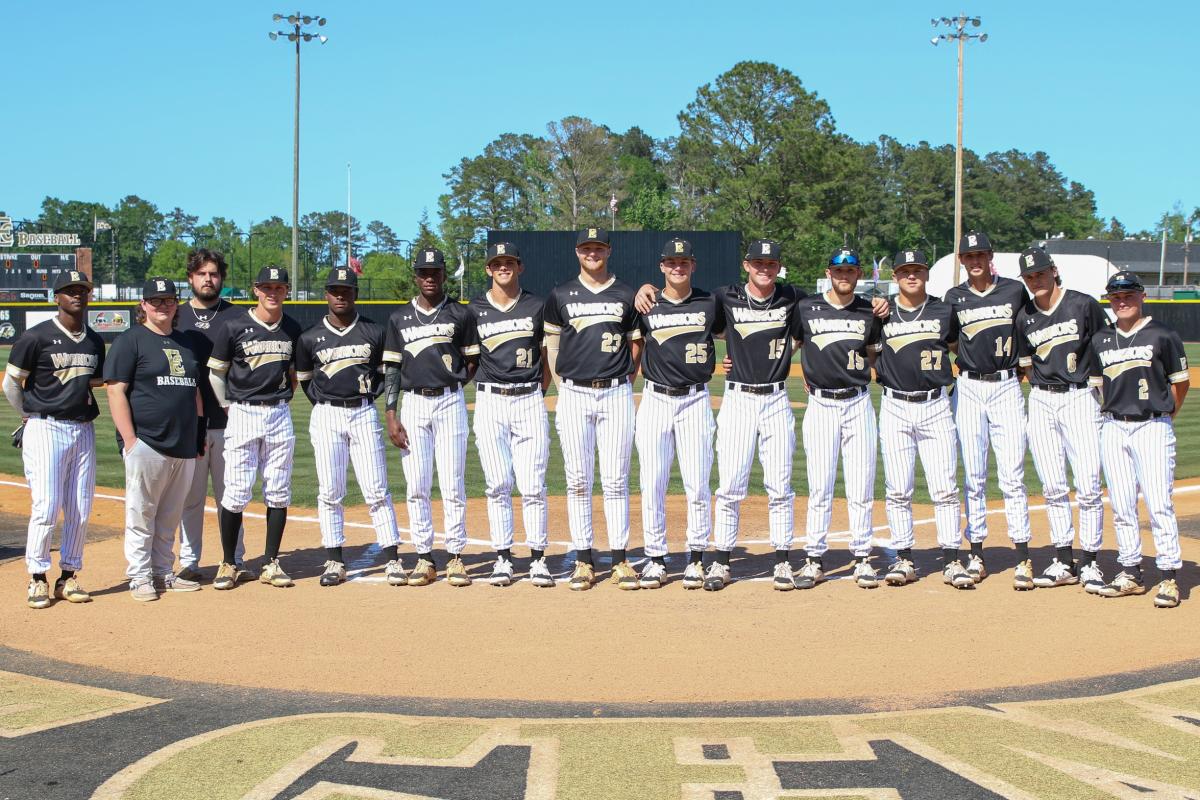 It was all Meridian on Tuesday night, April 26, as the No. 8 Eagles ran away with a pair of wins against the No. 20 East Central Community College Warriors in Decatur, 11-1 in game one and 9-5 in game two on sophomore night. With the losses, the Warriors move to 27-15, 13-13 on the year while the Eagles improve to 29-11, 17-7. The Warriors will now turn their attention to Coahoma as the Warriors travel to Clarksdale to take on the Tigers on Friday, April 29 to round out regular season play.

The Warriors are currently tied for 7th place in the MACCC with Northwest, Itawamba, and Gulf Coast at 13-13.

The Warriors fell behind early in the opener as the Eagles plated one run in the first before pouring another three in the second to take a 4-0 lead.

That advantage ballooned to 8-0 in the third as the Eagles added another four runs in the top half of the third. Two runs scored in the fourth and one in the fifth to push the lead to 11-0, but ECCC got one back in the bottom of the fifth after Ramie Harrison reached base on a single before being driven in on an RBI single from Clayton Cook.

Cole Boswell got the win for MCC as he threw all five innings and struck out four. Mason Willis picked up the loss for ECCC after throwing two and a third innings, and gave up six runs – all earned – on six hits with a pair of strikeouts. Miles Miller, Luke Odom, and Henry Thornton all threw in relief with Thornton's two strikeouts leading the bullpen.

ECCC posted five hits in the game with Cook's two singles and an Eli Collins double leading the way.

ECCC made a late push in the second game as the Warriors bounced back from trailing 5-0, but were unable to overcome the lead as the Eagles added three runs in the top of the seventh to secure the win.

Meridian plated two in the second and added another two in the fourth off a two-run homer to leap out to a 4-0 lead. That lead grew to 5-0 in the top of the fifth, but an error in the field in the bottom of the fifth allowed Leighton Jenkins to cross the plate before a passed ball plated Coleton Smith to pull the Warriors within three, 5-2.

MCC again added a run in the sixth, but an RBI triple from Harison followed by a towering two-run homer from Smith in the home half of the sixth cut the lead to just one, 6-5. Unfortunately, the Eagles big frame in the seventh kept the Warriors at bay.

Alec Sparks got the win on the bump for MCC, while Grant Edwards picked up the loss for ECCC after surrendering four runs – two earned – on five hits with four strikeouts through four innings of work. ECCC also threw Ervin Simmons, Cade Hall, Dagan Martin, Gage Tufnell, Odom, and Thornton in relief.

Smith led the Warriors at the dish with two RBIs on two hits, including the big home run.

The Warriors return the action this Friday, April 29, as the team travels to Clarksdale to face the Coahoma Tigers. Links to the lifestream will be provided once they become available follow East Central athletics on social media for updates. Games are slated for 12 and 3 p.m.