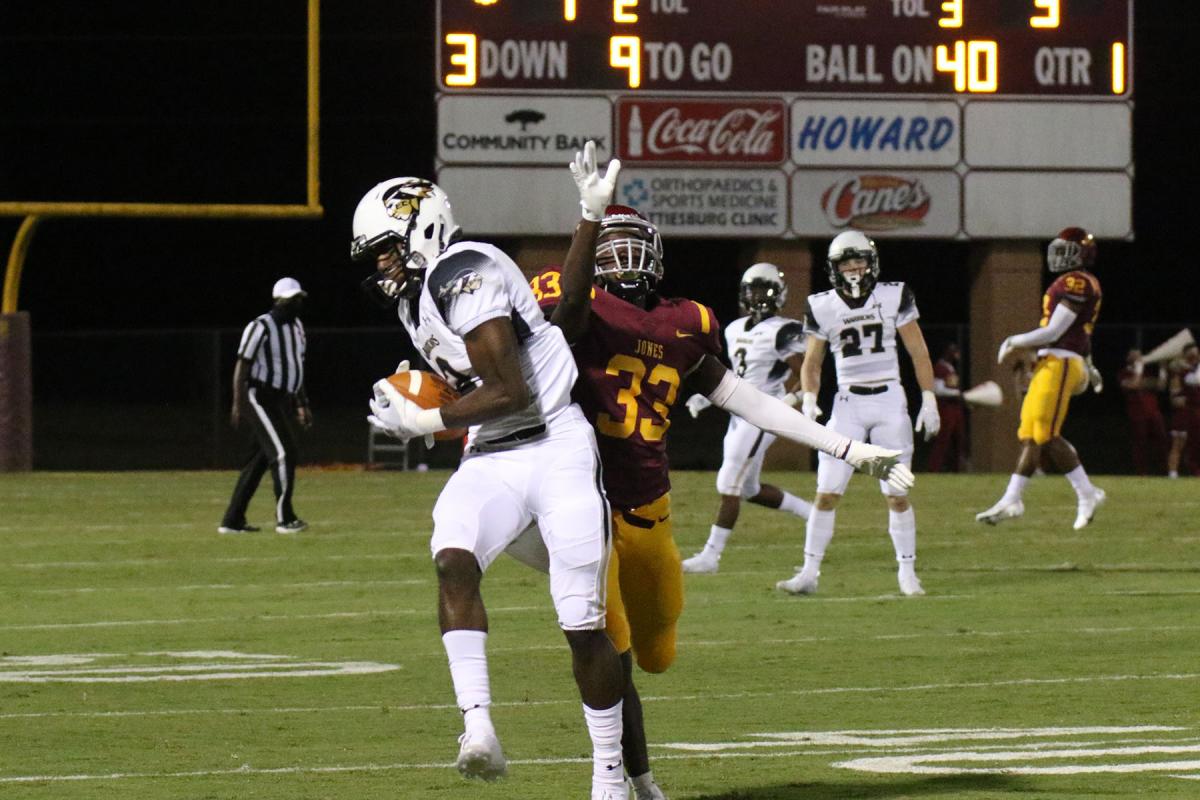 The Jones College Bobcats pushed out to a 24-3 halftime lead on their way to a 34-5 win over the East Central Community College Warriors Thursday, Oct. 1, in MACCC South Division football action at Bobcat Field at Sim Cooley Stadium in Ellisville.

It was the opener for both schools in an abbreviated six-game season of Mississippi Association of Community Colleges Conference South Division contests as the conference hopes to prevent the spread of the COVID-19 virus. The season also started five weeks later than usual.

The Bobcats have now won the last four games in the annual series, including a 35-13 win last October in Ellisville. East Central’s last win over the Bobcats came in 2016.

Only four Warriors who started at Jones a year ago were back in the starting lineup for the contest, which saw 10 ECCC freshmen earn starting roles. There were a lot of new faces on the Jones sideline as well, as the Bobcats returned only 14 players from last year’s team that went 7-3, advanced to the conference semifinals, and finished at No. 10 in the final NJCAA poll.

East Central got on the scoreboard on the opening drive of the game, moving to the Jones’ 16-yard line before settling for a 33-yard field goal off the foot of sophomore Robens Beauplan (Lehigh Acres, Fla., Riverdale). On the drive, sophomore quarterback Holman Edwards (French Camp Academy) connected with sophomore wide receiver John Hilbert (Brookhaven) for what appeared to be a 10-yard touchdown pass that was nullified by a penalty.

Jones would score the next 31 points in the game.

Bobcat running back Romal Webb scored from the four to cap a 10-play, 76-yard drive and put Jones up 7-3 with 8:39 to go in the opening stanza.

Neither team would score again until the 9:31 mark of the second quarter when the Bobcats tacked on a 42-yard field goal to move in front 10-3.

Jones scored twice more in the first half and just 51 seconds apart. Webb scampered 50 yards for a touchdown to give the Bobcats a 17-3 lead with 4:26 to play in the half. Just two plays later, Hershey McLaurin picked up a Warrior fumble and returned it 27 yards to the end zone to give Jones its 24-3 halftime cushion.

East Central moved into scoring position twice more in the first half and came away without points. The Warriors failed on a fourth and two from the Jones 14, and a Beauplan 49-yard field goal attempt fell just short.

Jones didn’t lose any momentum during the intermission. The Bobcats needed just three plays to score to open the third period with a 49-yard scoring strike from Quaterius Hawkins to Markel McLaurin to lead 31-3.

East Central’s only other points of the game came on a third quarter safety. Jones added a 25-yard field goal in the third quarter to close the scoring at 34-5.

Offensively, East Central managed 370 total yards with 280 of those coming through the air. Edwards connected on 15 of 28 passes for 214 yards. Sophomore Deonte Yarbrough (Louisville) hit on three of eight passes for 66 years. Hilbert had a big game for the Warriors with 139 yards receiving on seven catches. The Warriors managed just 90 yards on the ground.

East Central turned the ball over five times in the loss with three interceptions and two fumbles.

Beauplan, an All-American punter last season, had another big night averaging 52 yards on three punts with two downed at the one-yard line.

East Central will now host Southwest on Thursday, Oct. 8, with kickoff set for 6:30 p.m. at Bailey Stadium in Decatur. The Bears lost their home opener 41-3 to Co-Lin.

Attendance for the home opener will be limited to 25 percent capacity, or about 1,000 fans, as required by Mississippi Executive Order 1519. Three-game home season ticket packages are on sale for $25 online at www.eccc.edu/estore. Tickets may be picked up from 8:30 a.m. to 4 p.m. Mondays through Thursdays and from 8:30 a.m. to 11:30 a.m. on Fridays from the main Athletics Department Office in Brackeen-Wood Gym located adjacent to Bailey Stadium.

Any remaining tickets under the 1,000 capacity will be on sale for $10 each regardless of age at the main Bailey Stadium ticket window starting one hour prior to kickoff.