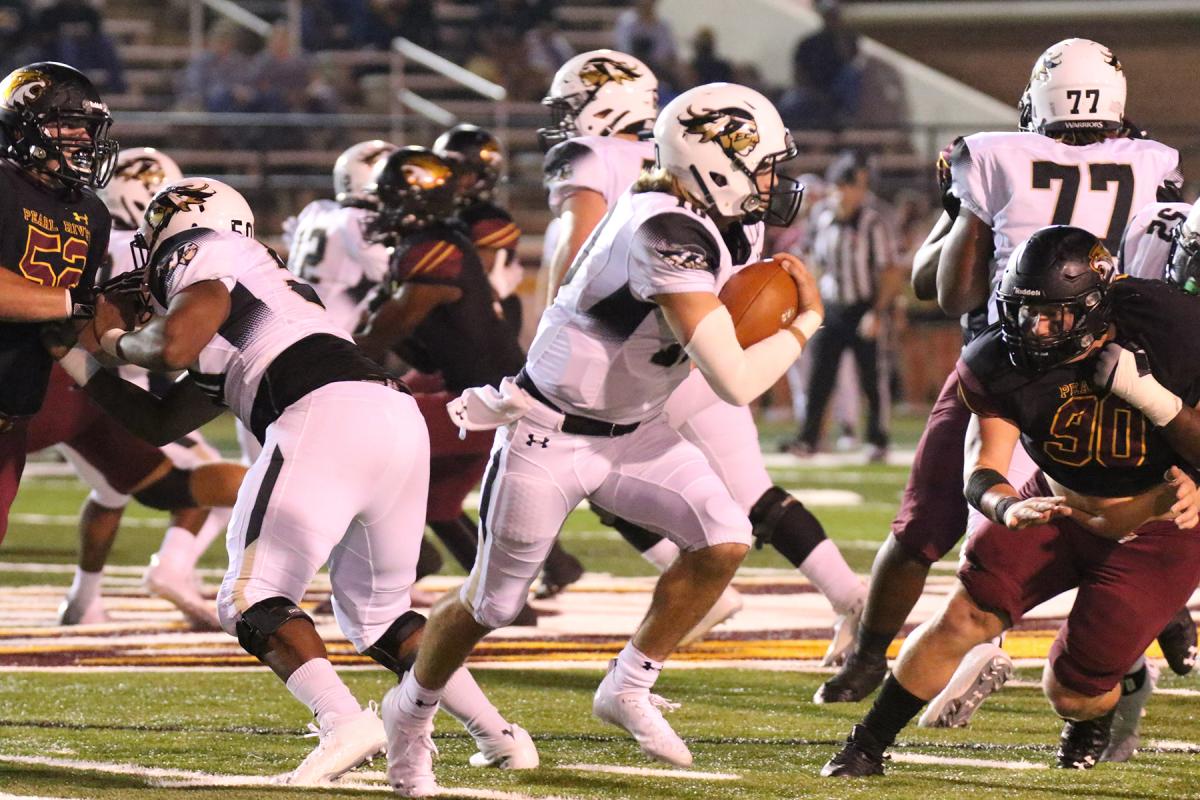 East Central quarterback Holman Edwards got the Warriors on the scoreboard first against Pearl River with a 56-yard scamper in the first quarter. (EC Photo)

With the loss, East Central falls to 1-2 overall on the season and 1-2 in Mississippi Association of Community Colleges Conference South Division play. Pearl River is now 1-2 overall and 1-2 in the division.

The Warriors got on the scoreboard first in the contest on their second possession of the game as sophomore quarterback Holman Edwards (French Camp Academy) raced 56 yards for the score. It was his second rushing touchdown in as many games. Sophomore kicker Robens Beauplan (Lehigh Acres, Fla, Riverdale) was good with the point after.

Pearl River wasted little time tying the game on its next possession with a 76-yard drive culminating with a 41-yard touchdown pass.

The Wildcats went up 14-7 just seconds later with a six-yard touchdown run after intercepting a pass from East Central’s Deonte Yarbrough (Louisville).

Twice in the second quarter East Central turned the ball over on downs in Pearl River territory before finally getting in the end zone again with 4:42 to play before the half on an eight-yard run by freshman Keyser Booth (Jefferson Davis County).

Pearl River needed just three plays to break the 14-14 tie to open the third quarter with a 71-yard touchdown pass. The Wildcats moved in front by two scores later in the third on another long touchdown pass, this one from 41 yards out.

Trailing 28-14, East Central scored on the first play of the final quarter on a seven-yard pass from Edwards to sophomore wide receiver John Hilbert (Brookhaven). Beauplan’s PAT made the score 28-21. The Warriors appeared to have tied the game midway through the fourth quarter when an 80-yard scamper by Booth was nullified due to a penalty.

Pearl River outgained East Central 455 to 234 in total yards in the game. Booth led the Warriors with 54 yards rushing, while Hilbert and freshman Matthew Williams (Holmes County Central) each had three receptions for 36 yards.

Sophomore corner Desmond Williams (Forsyth, Ga., Mary Persons) had a first half interception for East Central. Freshman linebacker Ke’Sean Johnson (Quitman) picked off a pass in the third quarter, thanks to a tip by sophomore linebacker Trenton Ladner (Hancock).

East Central will host defending national champion and undefeated Mississippi Gulf Coast next Thursday, Oct. 22. Kickoff from Bailey Stadium in Decatur is set for 6:30 p.m. Attendance will be limited to 25 percent capacity, or about 1,000 fans, as required by Mississippi Executive Order 1519. Any remaining tickets will be on sale for $10 each regardless of age at the main Bailey Stadium ticket window starting at 5:30 p.m. 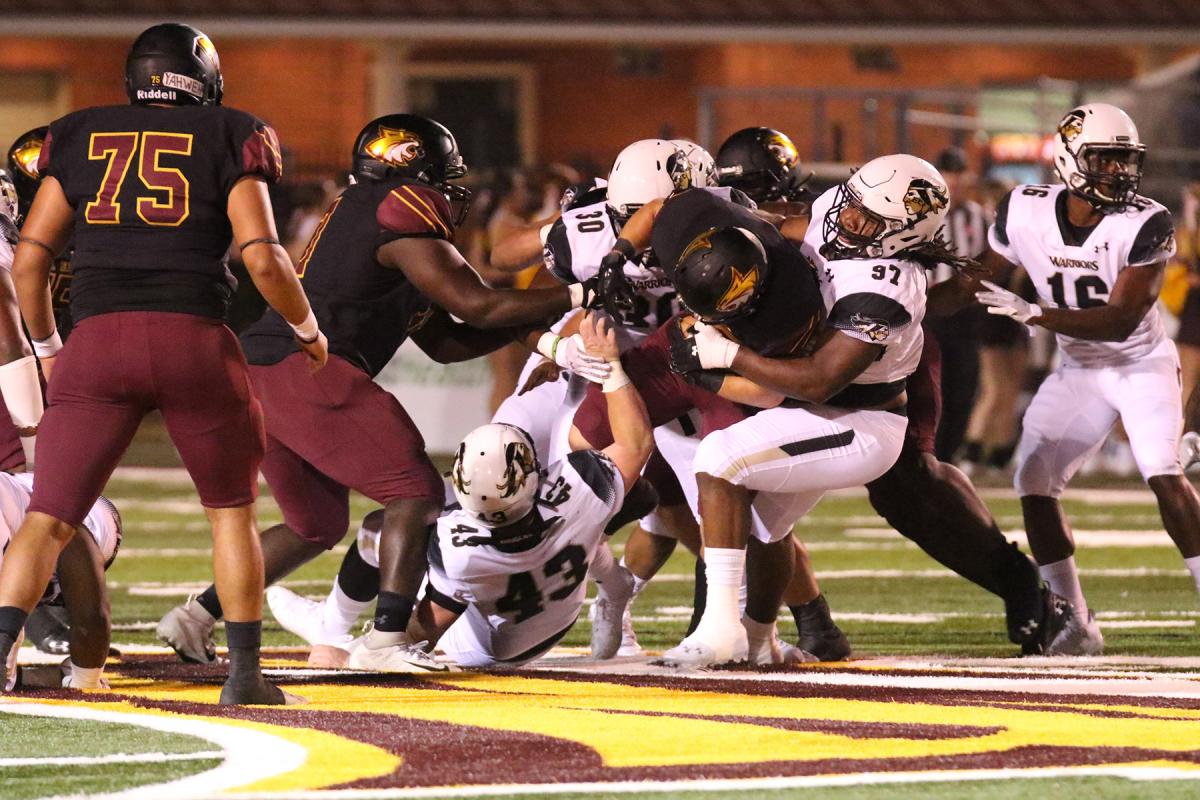 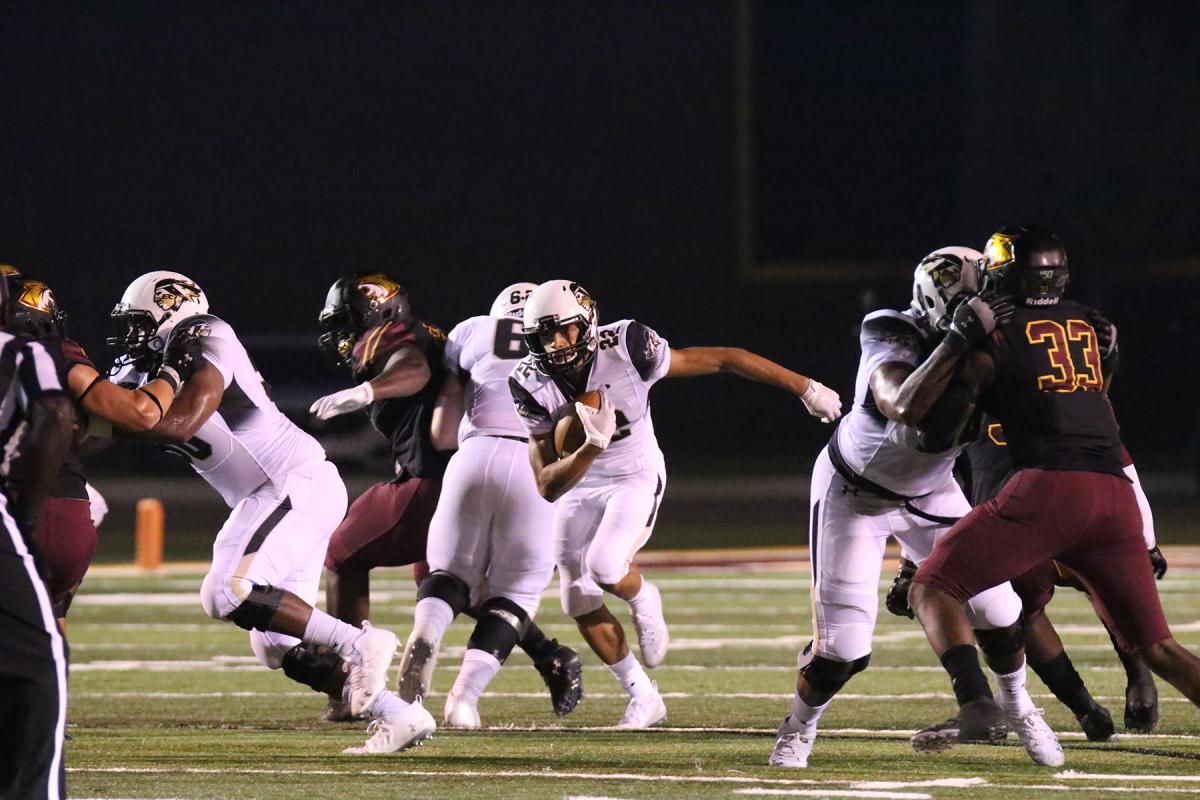 Freshman running back Larry Wilson (Hazlehurst) finds a gaping hole in the Pearl River defense during a first half carry. (EC Photo)​