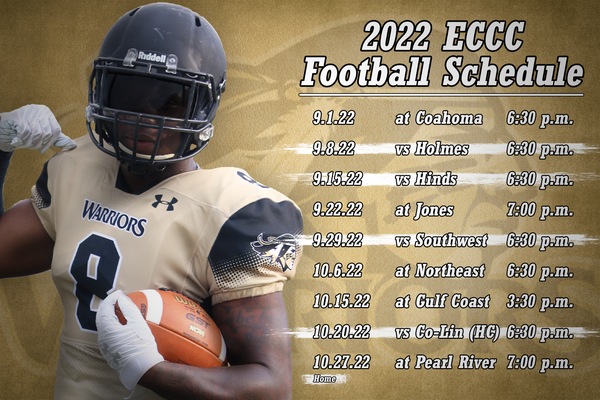 Football season is just 13 weeks away and the East Central Community College Warriors are itching to be back on the gridiron after finishing the 2021 campaign 3-6 overall and 2-4 in MACCC south division play.

The Warriors are slated for another nine-game regular season with four home games and five road trips.

The Warriors kick off the season with a road trip to Clarksdale as the Warriors face off with Coahoma. The matchup will be the first since 2015 when the Warriors took down the Tigers in week two of the 2015 season, a year in which the Warriors finished 8-3 overall and were H.O.T. Bowl champions.

ECCC's home opener comes in week two as the Warriors take on the Holmes Community College Bulldogs. The last meeting between the Bulldogs and Warriors came in 2017 when ECCC dropped the season opener on the road in Goodman, 49-14, to the then-ranked No. 11 Bulldogs.

The Warriors will be at home for a second week in a row in week three as the Hinds Eagles make the trip to Decatur. The Warriors and Eagles met up late in the season last year as the Eagles defeated ECCC, 52-14 in Raymond.

ECCC is back on the road on the 22nd as the team travels to Jones College to face off with the Bobcats at 7 p.m. The Warriors dropped their game with the Bobcats last season, 33-13, in the 2021 home opener.

The Warriors have their third home game of the month on the 29th as the Southwest Mississippi Community College Bears travel to Decatur. The Warriors defeated the Bears in 2021 in thrilling fashion as a late-game – potential go-ahead – field goal was blocked by NJCAA All-American Desmond Williams and scooped and scored by Michael Coats Jr. The 86-yard score put the Warriors in front 21-13 in the final minutes and secured the win.

The Warriors make the trip to Booneville for the first game in October for a week six matchup with the Northeast Tigers. The last meeting against the Tigers was in 2017 as the Warriors won it, 27-20, in a double-overtime shootout against the then-ranked No. 16 Tigers. ECCC's Mario Asagunla connected with current NFL Washington Commanders running back Antonio Gibson for an 11-yard score to secure the victory.

For the second year in a row, the Warriors travel to Perkinston to take on the Mississippi Gulf Coast Bulldogs. The game will be held on Saturday this season as it will serve as Gulf Coast's homecoming contest. The Bulldogs defeated the Warriors 31-13 a year ago.

ECCC's final home game of the 2022 campaign will be against Co-Lin as the Warriors host the Wolves for homecoming. The contest will kick at the regular 6:30 game time and feature a court presentation at halftime. The Warriors and Wolves went toe-to-toe last season, but ECCC came up just short as Co-Lin won 20-17 in overtime.

The Warriors round out the regular season on the 27th with a trip to Poplarville to face the Pearl River Wildcats. ECCC took down PRCC at home last season in a low-scoring bout that was capped off with a 45-yard game-winning field goal from ECCC's Jaren Van Winkle. The kick secured the 17-14 victory.

All East Central home games are scheduled for 6:30 p.m. kickoff times at Bailey Stadium located in Decatur. Fans that can not attend home games can watch the action live at www.eccclive.com/gold.