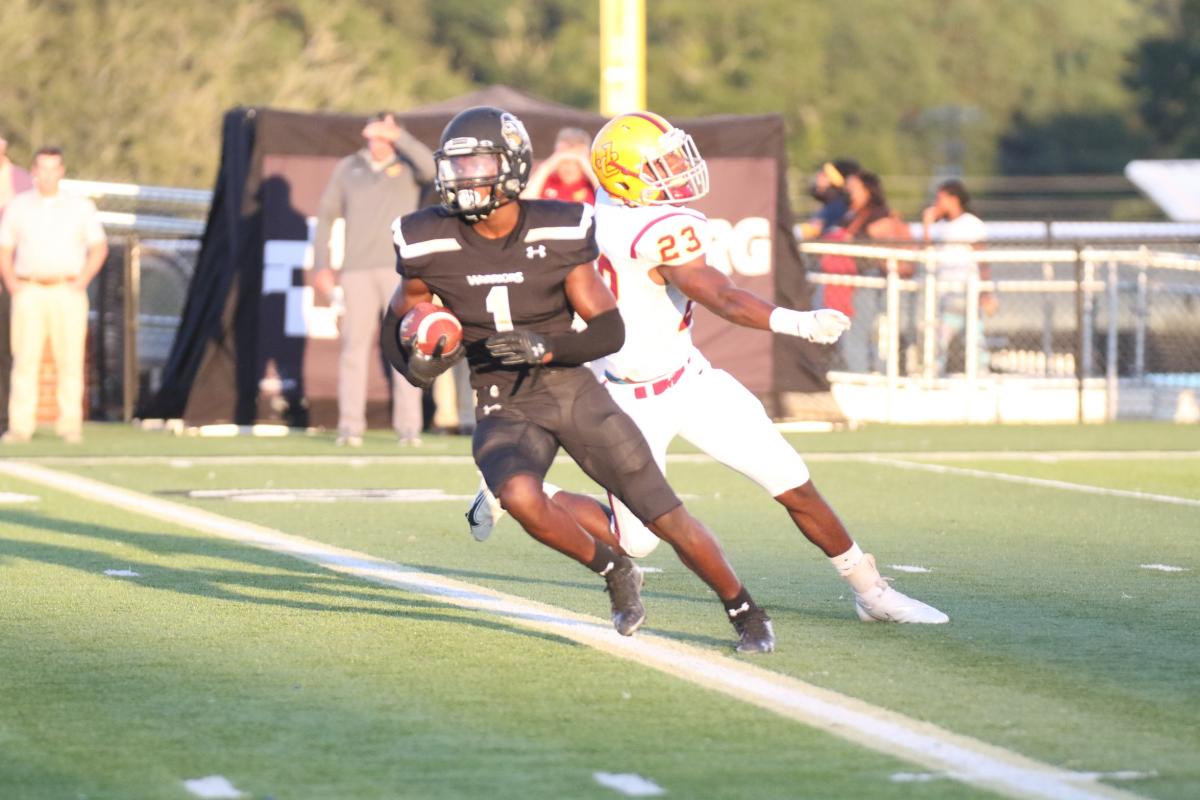 A big start for the No. 10 Jones College Bobcats lifted them over the East Central Community College Warriors on Thursday night, Sept. 16, in ECCC's 2021 home opener, 33-13. The Warriors showed a tremendous amount of grit as they battled rainy weather and scored two late touchdowns. The loss drops ECCC to 0-3 on the year and to 0-1 in MACCC South Division play. Jones improves to 3-0, 1-0.

After ECCC's opening drive stalled the Bobcats were on the board as La'Damian Webb punched in a two-yard score after a 57-yard carry put the Bobcats deep into Warrior territory. ECCC was unfazed by the quick strike as the Warriors were marching on the ensuing drive the 12-play drive went 66 yards but was ultimately cut short by an interception. Just one play later, Jones' quarterback Quaterius Hawkins connected with Bud Tolbert for an 89-yard toss and catch. Desmond Williams (Forsyth, GA) hawked Tolbert down at the one, but Webb broke through for another score. With 4:48 remaining in the first, Jones led 14-0.

In the second, another interception led to a short field for the Bobcats, the turnover would lead to a score as Hawkins scrambled in from 10-yards out, but Williams blocked the extra point making it 20-0. The remainder of the second was back-and-forth punts as rain pelted Bailey Stadium, making offensive progression difficult. The Bobcats were in the position to grow the lead late in the quarter as they lined up for a field goal, but Williams was there once again to deny the effort with another block. At the half, the Warriors trailed 20-0.

The Warriors attempted an onside kick at the start of the half but unfortunately did not recover. ECCC's defense dug in and held the Bobcats to a fourth and three, but Jones' Robert Henry broke free as the Bobcats went for it on a 40-yard score. The touchdown grew the lead to 27-0.

The next several drives for both clubs ended in punts or interceptions as the Warriors clawed back for offensive production. Late in the fourth, ECCC manufactured a 12-play, 77-yard drive that was highlighted by a pair of Gabriel Larry (Manvel, LA) rushes and a big pass to John Hilbert (Brookhaven) for 27 yards. The drive was eventually capped off with a nine-yard strike from Larry to Hilbert for the Warriors' first score of the night. The two-point try was no good, making it 27-6.

With less than a minute to play, the Bobcats fumbled as they tried to run the clock out as Tony Gibson (Church Point, LA) got in the backfield. Deiondre Fox (Philadelphia) jumped on it for the recovery deep in Jones' territory. One play later Larry ran it from 13-yards out for the score. Jaren Van Winkle added the PAT making it 27-13. ECCC recovered the ensuing onside kick, but a pick-six as the clock expired gave Jones the 33-13 victory.

Caleb Parten (Flowood) and Larry split time at quarterback throughout the night. Parten finished with 11-of-20 passing for 130 yards and one interception, while Larry posted six-of-20 for 78 yards, one touchdown, and four interceptions. Larry was ECCC's leading rusher with 78 yards on 13 carries, while Larry Wilson (Hazlehurst) posted 39. Hilbert led the receiving corps with four catches for 57 yards and a score, while Corey Goldwire (The Villages, FL) and Keyser Booth (Bassfield) both had over 40 yards.  Josten James (Wiggins) led the Warrior defense with seven tackles, while Fox and Ryan Kimbrell (Flowood) posted a team-high two tackles for loss each. Desmond Williams also had one interception in the game.

Jones outgained the Warriors 391 yards to 304 with Hawkins throwing for 172 and Webb rushing for 131.

The Warriors are on the road next Thursday, Sept. 23 as the team travels to Summit to take on the Southwest Bears for another MACCC South Division contest. Kickoff is set for 7 p.m. and links to coverage will be provided when they become available.