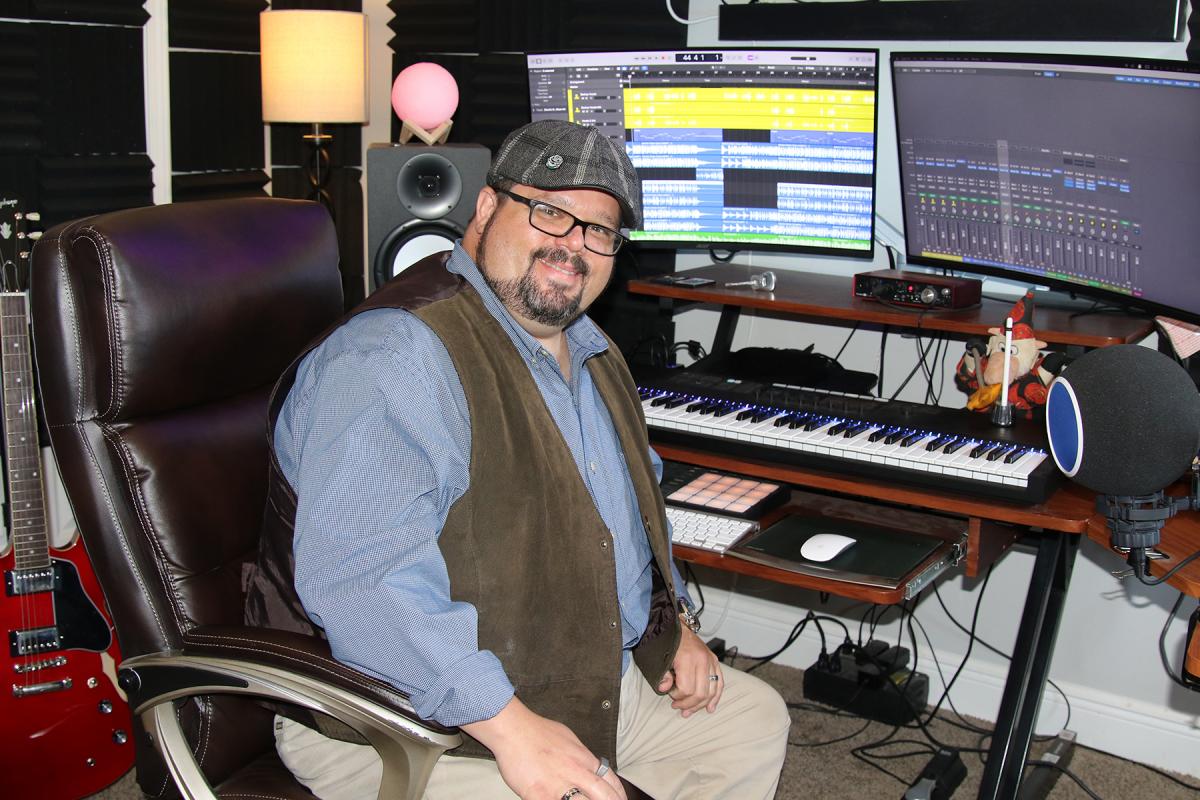 ECCC Guitar Instructor Chas Evans in his home studio where he wrote the music and the melody for the theme song to the new movie High Expectations.

Chas Evans estimates he’s composed the music for well over 1,000 songs over the past decade. But he’s never composed music heard on the big screen. That is until now.

The East Central Community College music instructor sat with family and friends in a Pearl, Miss., theatre April 8 as the sound of his work played throughout the theater and his name appeared in the closing credits.

The first names to scroll by under “Music” were Chris White and Chas Evans.

The movie is High Expectations, and Evans wrote the music and the melody for the theme song by the same name. White wrote the lyrics to the song and wrote and produced the movie as well.

The drama stars Kelsey Grammer, the Emmy and Golden Globe award winner of Cheers and Frasier sitcom fame; singer turned actress Ally Brooke, best known as a member of the all-girl singing group Fifth Harmony in her acting debut; and Taylor Gray, who was the voice of Ezra Bridger in the animated TV series Star Wars Rebels.

Touted as the best American soccer drama in decades, High Expectations played in theaters one night only, April 8, so that it would be eligible for the major cinematic awards. It will soon be available again on major movie streaming platforms.

White is credited with getting Evans’ music to the big screen. And it all happened by chance.

Evans owns a website called musicformylyrics.com. When White went looking for someone to put music to his lyrics, he stumbled across that website and on a whim sent the words to Evans.

“I write music for people literally all over the world who can’t or don’t write music,” explains Evans, who resides in Conehatta with his family. “Through my website, people send me lyrics and I write the music, verse, chorus, or whatever they need. I send them back an idea and if they like it we move forward and make it a song. I get about 300 visitors a week to my website.

“It just so happens that Chris found my website and sent me his lyrics. I wrote the music and melody and sent it back. He didn’t just like it, he loved it. He jumped for joy. His email back to me was in all caps!”

Evans has worked with clients from Australia to Uganda to the United Kingdom. Once he receives lyrics, along with the genre of music wanted, suggestions, and ideas, he composes a free sample for the client.

“People don’t want to pay for something they don’t like,” says Evans. “I would rather see if our styles work together first so it isn’t a bad experience for either of us. I typically send free samples of me playing the acoustic guitar and singing through their lyrics and if they like it, we go from there.”

After Evans got White’s enthusiastic response about his rendition of the song “High Expectations”, he proceeded to fully write the song. An accomplished guitarist, he originally wrote the song for guitar, but White preferred piano.

“I don’t play piano well, so I wrote it on guitar first and then programmed it on piano,” explains Evans. “The same with the version that has cello. I have some great digital instruments in my studio that I use when I venture from guitar.”

So Evans electronically programmed the music for piano and cello and then turned to Brazilian singer Grettchen Scraderbrock to record the vocals.

“Normally I will sing a lot of the lyrics that I write the music for, but Chris wanted a female voice,” comments Evans. “I’ve used Grettchen on several projects. She did a great job with the demo and Chris was just head over heels with the finished product.”

When White cast the High Expectations movie, he gave Brooke her first acting role as Sofia, a key figure in the film. So it was a natural that the former Fifth Harmony member turned solo artist would sing the song in the movie.

Evans says working with Brooke was the highlight of the entire experience for him. He had already pre-recorded the music when the two met at MadLife Studios in Woodstock, Ga., to record the songs.

“I met with Chris and Ally and the producers a few times via Zoom and then Ally and I met at the studio,” says Evans. “It was a once-in-a-lifetime experience with an extremely nice and talented person. She told me she heard the song for the first time prior to her movie audition and she cried. It was that powerful to her.”

Over eight hours, the pair recorded two songs. One with Brooke singing in English with piano and cello and one in Spanish with Evans on guitar. Evans conducted Brooke through the various takes of the two songs until he knew they had the “one.”

“At first I was super nervous being in the studio and directing someone with that much talent,” he explains. “But once I got in there it was if I had always been there. The producers were like, ‘You sure you haven’t done this before?’ And I said, ‘Nope.’ I think my experience at East Central and with The Collegians (the college’s student rock-n-roll band) really helped me working with Ally.

“She’s a workhorse. She walked into the studio and sang the entire time. No breaks. No lunch. She’s a pro.”

In High Expectations, Gray plays Jack, a professional soccer player with designs on joining a rival soccer team after his father (Kelsey Grammer), cuts him from the team he coaches. Jack suffers from anxiety and has an attack before tryouts. His girlfriend Sofia (Brooke) is a music therapist and aspiring singer who has written this song “High Expectations”. It comes on the radio and calms Jack down enough so that he can do the tryout.

“The song plays a powerful part in the story,” says Evans. “There’s also what I call the picnic scene where Ally sings in Spanish and it’s actually my guitar playing you hear. Ally plays guitar in the movie, and I coached her on how to appear to be playing the guitar by teaching her basic finger movements.”

Evans says that Icelandic film score composer Veigar Margeirsson scored the film and was able to take a lot of his melody from the theme song and weave it throughout the movie to tie the film together.

“This was my very first time working on a movie, but I hope it’s not my last,” says Evans. “I’m hoping this project opens more doors. After almost a decade of writing songs, it’s a testament to those musicians out there who get disenfranchised when they don’t make it right away. If you keep plugging away and working hard, that big break might come your way.”

“I feel lucky and honored to be a part of this project. I tell people that I finally put the notes in the right order,” he says with a smile.

Evans got validation of his hard work on the song “High Expectations” when he saw the movie premiere April 8. Along with his wife and her coworkers and several in-laws, Evans finally heard his work on the big screen.

“Chris would send me drafts of the movie and ask my opinion about certain aspects, but I had not seen it on the big screen,” says Evans. “Seeing the actual finished product with the high definition picture and the beautiful sound was surreal. Seeing my name in the credits legitimatized all the hard work, not just on this song, but over the past 10 years.

“Hopefully this was not a once-in-a-lifetime thing. I want to do it again. And of course having my family with me and them clapping at the end when the credits scrolled by was just a special feeling.”

In addition to teaching guitar at ECCC, Evans also directs the college’s rock-n-roll band The Collegians. A native of Chunky and a graduate of Newton County High School, he studied guitar at East Central under the late Tom Carson.

After graduating from ECCC, Evans completed his bachelor’s and master’s of music degrees from the University of Southern Mississippi, where he was instructed by Professor Giovanni De Chiaro. He won first place at the 1999 Mississippi Music Teacher Association guitar competition and has performed and recorded as a member of the Mississippi Guitar Quartet, which performed at Carnegie Hall in New York City in 2006.

In 2012, he released his debut solo album “Mississippi Sounds” featuring pieces inspired by the state’s heritage and scenery.