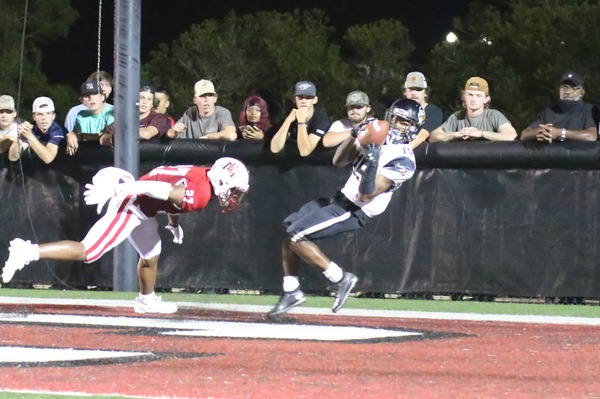 The Warriors of East Central Community College were finally back on the gridiron on Thursday night (Sept. 2) after the season was cut short a year ago. ECCC made the trip to Scooba to take on the East Mississippi Lions, but ultimately fell 32-7 as offensive woes plagued the Warriors. The loss drops the Warriors to 0-1 on the year but does not affect the divisional record. ECCC has another cross-divisional contest next week as the team travels to Moorhead to take on the Mississippi Delta Trojans on Thursday, Sept. 9 at 7 p.m.

Both squads struggled in the opening drives as the teams worked on finding good offensive rhythms. Neither team broke through these troubles until late in the first when EMCC's quarterback, Damon Stewart, scrambled for a 16-yard score on a broken play. The extra point was no good and put the Lions on top, 6-0.

East Miss added another in the second as Zias Perryman punched it in from two yards out, before knocking in a field goal a couple of minutes later growing the lead to 16-0, a score that would hold until halftime.

Despite the score, the Warriors' defense was playing very well as many players made exceptional open-field tackles, and forced the Lions to fight for every yard they gained. Offensively, ECCC continued to search for balance between the rushing and passing games.

The third quarter proved similar to the first half as both teams punted back-and-forth after strong defensive stands. Late in the period, EMCC's Peyton Rodgers knocked in a 34-yard field goal, his second of the night, to grow the lead to 19-0. That advantage would grow to 25-0 early in the fourth as the Lion offense put up another touchdown, but failed on the extra point.

A bright spot for the ECCC offense came midway through the fourth as the Warriors took advantage of an EMCC fumble in their own territory. Quarterback Gabriel Larry (Manvel, La.) capitalized on the short field and rolled out to his left, and picked up a big first down on a 15-yard run early in the drive. He followed that play with a beautiful pass to the back of the endzone to Keyser Booth (Bassfield). Booth made a stellar catch as he fell backward and tipped the ball back to himself for the score. Jaren Van Winkle (Pinson, Ala.) tacked on the extra point to cut the Lion lead to 25-7.

Unfortunately, that proved ECCC's only score on the night as the Lions picked another touchdown in the final minute of the contest pushing the score to the final, 32-7.

The Warriors finished the night with 94 total yards on 51 plays, while the Lions posted 383 yards on 92 snaps. Third downs were the biggest difference-maker in the contest as the Warriors were for 0-of-16 on the evening forcing the team to punt 13 times.

ECCC's offense was led by Larry Wilson (Hazlehurst) who posted 47 yards on 15 carries from the running back position. Larry and Caleb Parten (Flowood) split time at quarterback throughout the night with both players completing three passes.

The Warrior defense was led by Ke'Sean Johnson (Quitman) and Josten James (Wiggins) who both posted nine tackles. Johnson also led the team in sacks with two. Other notable performances came from Anthony Thomas (String), Tori Mulkey (Ozark, Ala.), and Ryan Whitfield (Noxapater). Thomas wrapped up 2.5 tackles for loss and a sack, while Whitfield posted 1.5 sacks. Mulkey joined James with two pass breakups each.

EMCC was led by Stewart who posted 176 passing yards and a score on the ground, and a host of running backs splitting duties in the run game. Kevin Barnett led the Lions' receivers with 87 yards on the night. Brandon Lairy led EMCC's defense with six total tackles and two tackles for loss.

Fans will be able to follow along with next week's game in Moorhead by tuning in to Crusin' 98.3 FM with Phillip Palmertree and Paul Willams on the call. Kickoff is set for 7 p.m.