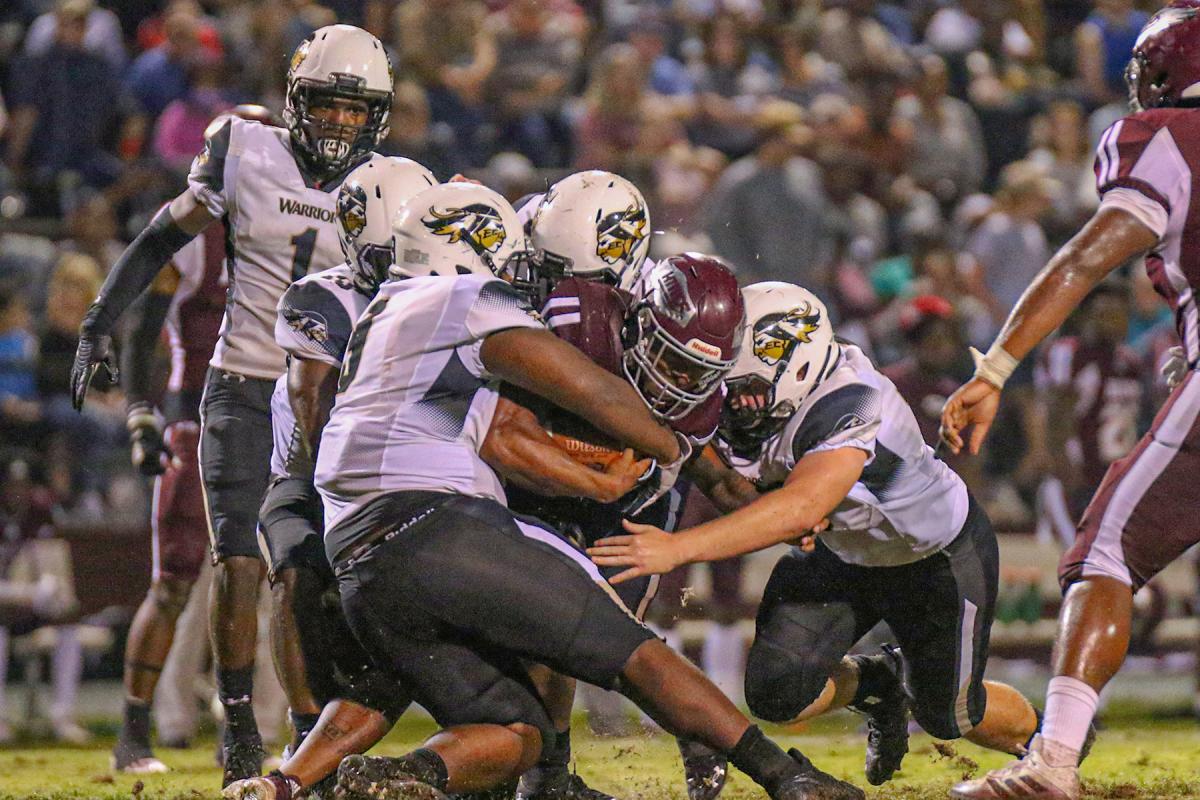 The game had an electric start as both squads found the endzone in the opening minute of action. The Warriors fumbled the opening kickoff which resulted in Hinds taking over at ECCC's nine-yard line. Just two plays later there were points on the board. Not to be outdone, on the ensuing possession, ECCC's Gabriel Larry (Manvel, La.) hit a streaking Corey Goldwire (The Villages, Fla.) for a 77-yard score. Jaren Van Winkle (Pinson, Ala.) knocked in the extra point to tie the game, 7-7, with 14:10 on the clock.

Hinds began the rushing attack later in the first and added a score with a 58-yard touchdown run from quarterback BeSean McCray, before quickly scoring again to start off the second quarter with another rushing score — this one from Jeffrey Pittman on a fourth-and-goal situation. A field goal from Hinds' Ben Duncan pushed the Eagles' lead to 24-7 at the half.

The ground-and-pound offensive effort from the Eagles continued in the second half as the Eagles found the endzone on their first two possessions of the third quarter on 13-straight rushes to grow the lead to 38-7.

The fourth quarter opened with an 83-yard Hinds touchdown pass before another rushing score capped off the Eagles' scoring effort on the night later in the final frame.

The Warriors' next, and final, possession was highlighted by big connections from Larry to Tay Simms (Morton) and to Goldwire before the QB found Noah Tice (Wiggins) in the endzone for a score. The touchdown bookended the game for ECCC as the Warriors scored on their first and last play from scrimmage.

Hinds outgained the Warriors 542 yards to 304, with 417 of them coming from the Eagles' rushing attack. The Warriors racked up 222 passing yards, just one yard shy of the season-high while posting 82 rushing yards. Larry finished the night 11-for-19 with two scores, while Larry Wilson (Hazlehurst) led the rushing attack with 56 yards on 11 touches. Goldwire finished with a season-high 127 receiving yards. The Warriors turned the ball over five times, while only posting one takeaway, a fumble recovery, making Thursday's matchup just the second game of the year (East Miss) without a Warrior interception.

The Eagles were led by Pittman who posted 152 yards on 11 touches, while four other Eagles posted 60+ yard rushing performances.

ECCC was led by Anthony Thomas (Stringer) on the defensive side with eight tackles, while Equandric Ross (Prentiss) wrapped up seven. Rish Alford (Houston) had one sack and forced fumble, while he, Ke'Sean Johnson (Quitman), Deiondre Fox (Philadelphia), Trustin Northington (Bay St. Louis), and Peyton Posey (Union) all posted tackles for loss.

The Warriors are back in Decatur next Thursday, Oct. 28 as ECCC plays host to the Coahoma Tigers. Kickoff is set for 6:30 p.m. and the game will serve as sophomore night. Fans that cannot attend, can watch the game live at www.eccclive.com/gold.