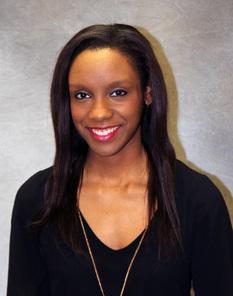 Tierra Robinson has joined the Office of Public Information at East Central Community College in Decatur as sports information/communications specialist.

A native of Eufaula, Ala., Robinson received her bachelor’s degree in Integrated Marketing Communications from the University of West Alabama in Livingston.

Prior to joining East Central, she was a reporter for Fox 30 News in Meridian. She also has interned with WTOK-TV in Meridian covering sports, including SEC Media Days, and has served as a videographer, editor, photographer and reporter for UWA’s Studio 96 Productions and as a filmer and assistant video coordinator for the UWA football team.

While a student at UWA, Robinson won several awards in the Southeast Journalism Conference competition and was named UWA’s 2015 Broadcast Journalist of the Year. She also was a UWA Ambassador and Miss University of West Alabama.

She is an active member of the Association of Women in Sports Media.