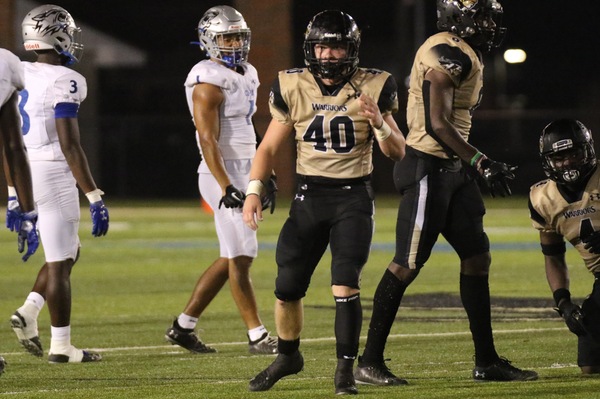 It was a heartbreaking loss for the East Central Warriors on Thursday night, Oct. 14, as the Copiah-Lincoln Community College Wolves grabbed a three-point, 20-17, victory on Homecoming night. Just like last year, 60 minutes was not enough time to determine a winner, unfortunately, overtime this season, fell into Co-Lin's favor. The win is Co-Lin's first victory over the Warriors since 2018 and drops ECCC to 2-5 overall and to 2-3 in MACCC South Division play. Co-Lin improves to 3-4, 3-2 on the year.

The game started off with a bang as the Warrior defense stuffed the Wolves' opening possession. Sophomore standout Desmond Williams (Forsyth, Ga.) went back to return the first punt of the contest and got Bailey Stadium rocking as he returned it 81-yards for a score. Jaren Van Winkle (Pinson, Ala.) tacked on the extra point to give ECCC a 7-0 advantage.

The Warriors picked up two turnovers in the first half with a couple of interceptions from Ke'Sean Johnson (Quitman) and Equandric Ross (Prentiss), but neither takeaway resulted in points as a pair of ECCC field goals missed and another was blocked. The result was the Warriors taking their 7-0 lead into the break.

The Wolves got on the board in the third quarter with an 81-yard pick-six from Ques McNeal for the first score of the second half, but the point-after attempt was blocked, maintaining the Warriors lead, 7-6. The Warriors tried to respond, but the ensuing drive ended in Co-Lin's territory. Ross James (Flowood) pinned Co-Lin on their own three-yard line with a stellar punt and the Warrior defense capitalized with a fumble recovery just three plays later. Dareon Goodrum (Watkinsville, Ga.) forced the fumble, while Tori Mulkey(Ozark, Ala.) recovered it at the Wolves' 14 yard-line. Just one play later, Courtland Harris (Hattiesburg) got his first touchdown of the year as he plowed through the Wolf Pack defense for a score. Late in the third, the Warriors led, 14-6.

In the fourth, the Warriors made an outstanding goal-line stand to end a 14-play, 93-yard Wolf Pack drive. Though it swung momentum even further into ECCC's favor, the Warriors were unable to pick up points. With 2:02 remaining in the game, the Wolves took over at their own 21-yard line. The Wolf Pack put together an 11-play drive over the next minute and a half that ended in a four-yard toss-and-catch with 31 seconds remaining. Co-Lin converted to the two-point try to tie the game at 14-14 and send the contest to overtime.

The Warriors lost the coin toss and were forced to play offense in the first overtime period. After some penalties hindered the Warriors, Van Winkle booted a 43-yard go-ahead field goal. On Co-Lin's possession, the Warriors put the Wolves in a third-down situation, but Paul Hargrave found Erick Rogers from 12-yards out for the walk-off win, 20-17.

The Wolves outgained the Warriors 369 yards to 213 but ran 88 plays to ECCC's 61. ECCC posted a season-high 167 rushing yards on the night led by an 80-yard performance from Larry Wilson (Hazlehurst), a 42-yard night for Gabriel Larry (Manville, La.), and 40 yards from Harris.

Defensively, the Warriors played very well with Mulkey leading the team with 13 tackles and Williams adding 10 tackles to his special team's touchdown; however, sophomore Rish Alford (Houston) shined brightest as the defensive end wrapped up a career-high four sacks for 31 yards and recovered a Wolf Pack fumble.

The Warriors are back on the road next week, Thursday, Oct. 21, as the team travels to Raymond to take on the Hinds Eagles for the final South Division matchup of the year. Kickoff is slated for 7 p.m. and links to the live stream will be posted when they become available.