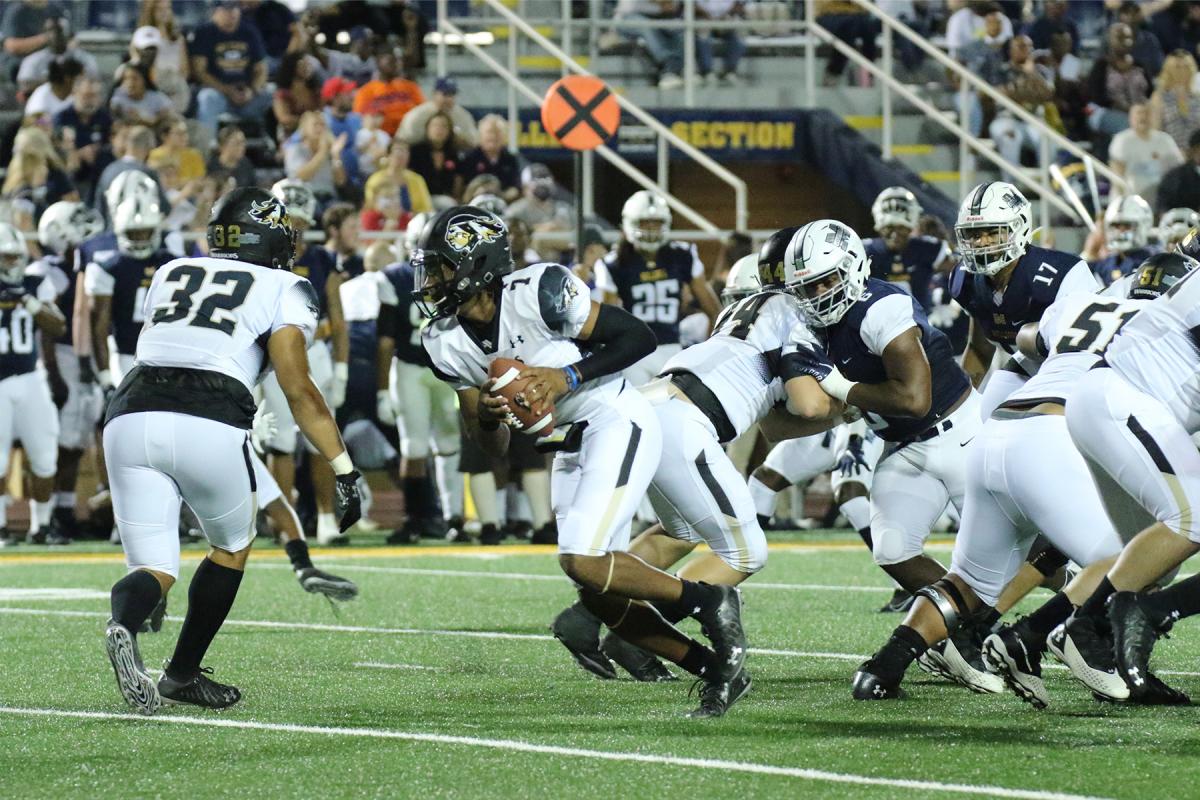 The East Central Community College Warriors showed a great amount of grit Thursday night, Oct. 7, in Perkinston but ultimately fell to the No. 9 ranked Mississippi Gulf Coast Community College Bulldogs, 31-13, after MGCCC rattled off 17 fourth-quarter points. The score was not an accurate reflection of the game as a whole with 10 of the Bulldogs' points coming in the final three and a half minutes of play. With the loss, the Warriors drop to 2-4 overall on the year and to .500 in the MACCC South Division with a 2-2 record. Gulf Coast improved to 5-1, 3-1 on the year.

The Bulldogs were first on the board with an eight-play, 57-yard drive on their second possession of the game which was capped off by a Phillip Short pass to Jalen Bracey from 12-yards out.

Gulf Coast's next drive was cut short by an interception from reigning NJCAA Defensive Player of the Week Desmond Williams (Forsythe, Ga.). The sophomore, who posted an ECCC-record four interceptions last week, ran it 35-yards to the Bulldog 10-yard line. A handful of plays later, on a fourth and goal from the one, Carlois Walker (Decatur) pounded his way into the endzone for the Warriors' first score. Jaren Van Winkle (Pinson, Ala.) tacked on the PAT to tie the game, 7-7, with five minutes remaining in the first.

Late in the first, a Gulf Coast drive stalled at the Warrior 29-yard line as ECCC's defense protected their end of the field. After turning the ball over downs, the Warriors took over and manufactured a six-play drive highlighted by a 41-yard toss-and-catch from Gabriel Larry (Manvel, La.) to Tay Simms (Morton) and a 20-yard scamper from Larry. The drive ultimately ended in a 24-yard field goal from Van Winkle, giving ECCC a 10-7 advantage. That score would hold through the half.

The Bulldogs took their first possession of the second half deep into the Warriors' redzone, and on fourth and one from the four-yard line, MGCCC elected to go for it, but Peyton Posey (Union) denied the rush up the middle. The momentum briefly swung in ECCC's favor, but after a three-and-out, the Warriors were forced to punt and surrender a short field. One play later, Short connected with Micah McGowan for a 35-yard MGCCC touchdown, making it 14-7 in favor of the Bulldogs.

Gulf Coast added another score early in the fourth quarter, pushing the lead to 21-13, but Williams returned the ensuing kickoff 51-yards into the MGCCC territory. The drive did not result in a touchdown, but Van Winkle was able to put another through the uprights, making it 21-13 with 12:02 to play. Williams grabbed yet another interception on the next drive, his sixth in the past two games, but ECCC was unable to get points off the turnover.

The Bulldogs put up another field goal down the stretch, and added a 45-yard interception touchdown return with 3:14 on the clock, to grow the lead to 31-13.

East Central finished the night with 193 yards of offense on 59 plays, while Gulf Coast posted 359 yards on 84 plays. The Warriors held the Bulldogs to 0-of-3 fourth-down attempts and came out one ahead in turnovers. Larry led the Warrior offense with 108 passing yards on 7-of-19 passing, while Larry Wilson (Hazlehurst) had 49 yards on 15 carries. Gulf Coast was led by a 183 yard game on 33 caries from Cam Thomas. Simms led ECCC's receivers with 53 yards, while John Hilbert (Brookhaven) had a team-high three receptions.

The Warriors are back at home next Thursday, Oct. 14 as ECCC takes on Co-Lin for homecoming. Kickoff is set for 6:30 p.m. and for more information about homecoming festivities, visit www.eccc.edu.