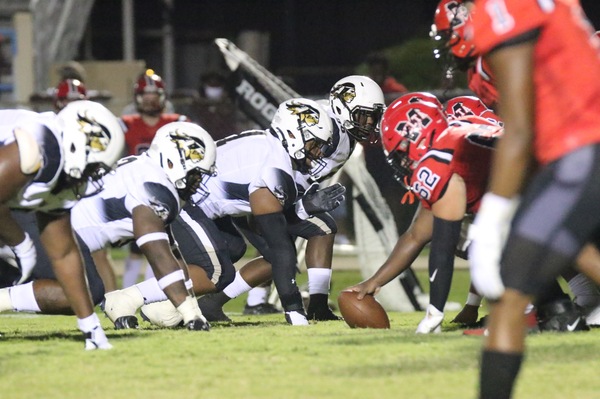 With just 1:49 remaining in the game, the Mississippi Delta Trojans knocked a go-ahead field goal through the uprights at Jim Randall Stadium in Moorhead, Miss., Thursday, Sept. 9. The kick gave MDCC a two-point advantage, and eventually, the win, 16-14. The loss drops the Warriors to 0-2 for the first time since 2016. Though it is not the start the East Central Community Warriors were hoping for, in 2016 ECCC rallied and went on to win five games that year and advance to the MACJC State Playoffs. The Trojans move to 2-0 on the season after defeating Pearl River on the road in week one.

The game in Moorhead saw fireworks early as the Trojans took it 85-yards on their first play from scrimmage as quarterback Jalon Jones connected with Lorenzo Perez on a quick pass. Perez broke one tackle and took it to the house for an early lead. MDCC's Mason Caldwell missed the PAT, giving the Trojans a 6-0 lead.

The Warriors were able to respond midway through the first as Delta fumbled in their own territory. ECCC's Anthony Thomas (Stringer) scooped it up and got a Warrior possession started at MDCC's 37-yard line. After a Courtland Harris (Hattiesburg) run, quarterback Caleb Parten (Flowood) threw a great ball to Tay Simms (Morton). Simms was untouched on the 33-yard score. Jaren Van Winkle (Pinson, Ala.) nailed the extra point, giving ECCC their first lead of the night, 7-6.

After a Trojan punt, the Warriors took over for the first time in the second quarter. The Warriors quickly rattled off a five-play, 78-yard drive to grow their lead. The Parten to Simms connection shined in the quick drive as Simms took one pass 44 yards into Delta's territory. Just three plays later Parten connected with Keyser Booth (Bassfield) from 26-yards out for the score. The Van Winkle PAT put ECCC on top, 14-6, a score that held through halftime.

After several stalled drives by both teams, the Trojans took over late in the third quarter. MDCC quarter Jones had a 16-yard run to close out the third quarter and put the Trojans in Warrior territory, and on the first play from scrimmage in the fourth, Jones ran it in from 39-yards out for a touchdown. The extra point was good and cut the Warrior lead to 14-13 with 14 minutes remaining.

The fourth quarter saw lots of punts until the Trojans took over with 7:08 on the clock at their own eight-yard line. MDCC marched the field on a 10-play drive highlight by a 17-yard and 23-yard passes from Jones. The Warrior defense dug their heels in the red zone and forced the Trojans to send out the kicking team with less than two minutes to play. Delta's Caldwell lined up for a 30-yard field goal and knocked it through, but a false start negated the score. On the following attempt, ECCC's Desmond Williams (Forsyth, Ga.) broke through the line and block the would-be game-winning field goal, but an offsides penalty allowed the Trojans to try again. On the third attempt, from 35-yards out, Caldwell sent it through giving Delta the win, 16-14.

Despite the loss, the Warriors' offensive production looked great as the team totaled 306 yards with 214 coming through the air and 92 on the ground. Parten was 20-of-35 passing, the most completions since Mario Asagunla connected for 20 against Southwest in 2017, for 214 yards and two scores. Six Warriors hauled in catches with Booth's six receptions leading the way. Simms posted four receptions for a team-high 104 yards and a score. The running game was led by Larry Wilson (Hazlehurst) who had 22 carries for 64 yards and Carlois Walker (Decatur) with nine carries for 25 yards.

ECCC is back in action on Thursday, Sept. 16 for the home opener at Bailey Stadium as the Warriors play host to Jones College. The game starts MACCC division play and will kickoff at 6:30 p.m. Tickets to the game are $10 and fans will have an option of buying season tickets at the gate for $40. For those that cannot attend, fans can watch live at www.eccclive.com/gold or listen live at WKOZ Cruisin 98.3 FM.