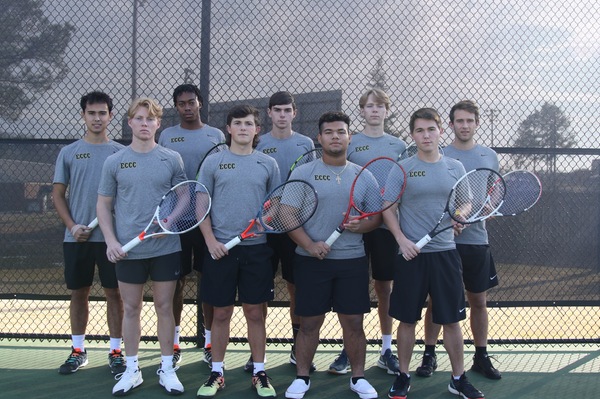 The East Central Community College men's tennis team closed out the 2021 season with a No. 19 national ranking in the final Oracle ITA poll after a stellar performance at the NJCAA DI Tennis Championship in Plano, Texas. The Warriors finished the tournament tied as the 18th overall team, the third-best finish upon MACCC schools.

"I'm very proud of our guys," said ECCC head coach Jay Pacelli. "We put our best foot forward with contributions from every player."

The tournament saw many last-minute changes as weather entered the area and resulted in several matches being moved to the indoor facilities at the Southern Methodist University Tennis Complex.

ECCC's Chris Lawrance (York, Australia) played in the No. 1 singles draw for the Warriors. The sophomore, and University of Texas Rio Grande Valley signee, defeated Sauk Valley's Preston Engal 6-3, 6-1 in the opening round, before taking down Meridian's Matthew Tennant in the second, 7-6, 6-3. In the quarter-finals, Lawrance matched up with the No. 1 seeded Jack Clements of Cowley and fell 6-3, 6-2.

At No. 2 singles, Isaac Santitto (Innisfail, Australia) battled it out with Wallace State's Connor Coots but fell in a lengthy three-set match, 6-0, 4-6, 6-3. The Alcorn State signee took on USC-Sumter's Heimanarii Lai-San in the consolation bracket but lost 8-1.

Steed Springfield (Vicksburg) took on Barton's Barnabas Kalaba in the opening round at No. 5 singles. After a hard-fought loss, the freshman faced Wallace State's Gage Anderson in the consolation bracket and fell 8-4.

In doubles play, Lawrance and Santitto blanked Illinois Valley in the opening round of the No. 1 flight, 6-0, 6-0. The pair then faced East Florida State, the four seed, and fell 6-4, 6-4 in a tough matchup.

Gordon and Crimm played in the No. 2 doubles flight for the Warriors and lost to Harford 6-1, 6-0 before dropping a match to Jones College in the consolation bracket.

Springfield and Samuel Turner (Mathiston) were in action at No. 3 doubles. The duo picked up a big win against Marion Military 2-6, 7-6, 6-2 in the first round before falling to a tough Wallace State team in the second round, 6-2, 6-2.

Overall, the Warriors had a very strong showing on the national stage and proved yet again to be a premier tennis program in the MACCC. The Warriors' impressive finish on the season continues an upward trajectory for the program under the leadership of sixth-year head coach Pacelli as ECCC continues to reach new heights on the courts.