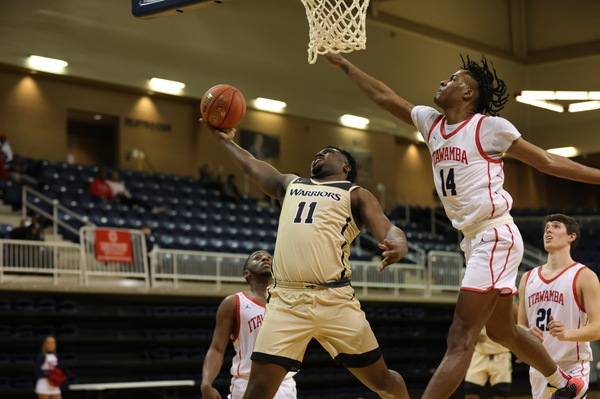 The East Central Community College Warriors, coming off an incredible shooting performance on Monday night, Jan. 10, fell in a heartbreaker to the Itawamba Indians on Thursday, Jan. 13, 60-57. The loss moves ECCC to 4-6, 2-2 on the year, while the Indians move to 9-3, 3-2.

The opening half of play was back-and-forth as neither team could build a commanding lead. Baskets were tough to come by for both squads as the defenses dug in. Itawamba went on a quick scoring burst in the final minutes of the first half to take an eight-point, 37-29, lead into the half.

The second half saw the Indians maintain and eventually grow that lead to as large as 14 in the final seven minutes of play. The Warriors never wavered and responded with a press defense that put the pressure on ICC ball handlers and allowed ECCC to fire off a 15-0 run. The huge momentum swing put the Warriors on top by one, 57-56, with just 90 seconds remaining in the game.

Some solid shooting from the stripe in the final minutes put ICC back on top by one, 58-57. ECCC had a couple of possessions on the other end of the floor and put up some uncontested shots, but unfortunately, neither of them could fall. ICC padded the score with another pair of free throws to put the game on ice.

Seven Warriors found the scoring column in the game with Christopher Keys (Quitman) leading the way. The freshman poured in 24 points with 16 of them coming in the second half. David Berry (Mendenhall) added 15, while Demajion Topps (Winona) scored 12.

The Warriors are back in Decatur on Tuesday, Jan. 18, as the team plays host to the Meridian Eagles. That game tips at 6 p.m. and can be seen live at www.eccclive.com/gold.